In return, I received two payments of $250 and a really really cool T-Shirt + stickers that I posted on Reddit here: 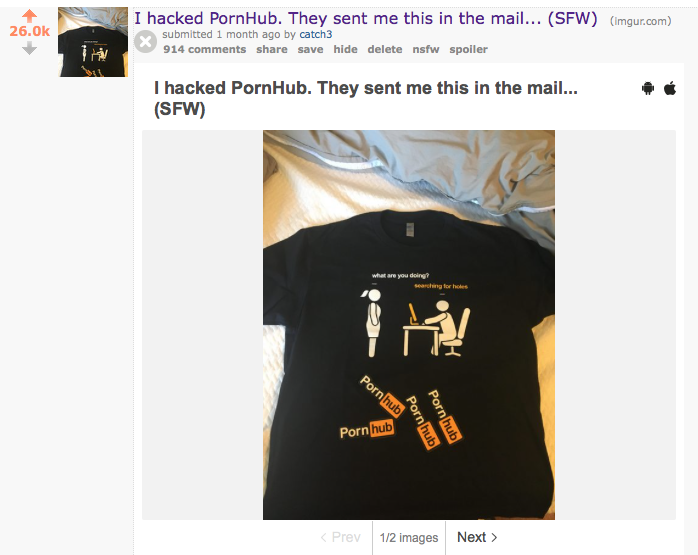 An attacker can use XSS to send a malicious script to an unsuspecting user. The end user’s browser has no way to know that the script should not be trusted, and will execute the script. Because it thinks the script came from a trusted source, the malicious script can access any cookies, session tokens, or other sensitive information retained by the browser and used with that site. These scripts can even rewrite the content of the HTML page.

The first one was found using the “redeem code” section of the site – it didn’t check to see if the code being entered in the text input for the redeem code was an actual payload, so I was able to use the following payload to reflect the script on the page:

Without the words in front of it, the application would reject it and nothing would appear on the page. Entering something non-malicious to begin would trick the validator, and in turn, allow the payload to execute.

The second vulnerability was also a XSS. This was was a bit simpler, and was found by entering a payload in a URL parameter that only appears once to new users… which is why I think it wasn’t found until now – most bug hunters like to get a feel of a website before they start poking around and trying to get things to break, but usually I take the different approach and use incognito windows so that the website thinks it’s the first time I’ve ever visited the site before. This is where the vulnerability existed.

I have other bugs and vulnerabilities that are cooler and more intense than this one coming soon, so check back later and I’ll share them with you. Additionally, you can follow me on Twitter to stay up to date with my bugs and what I’m doing, if you wish.